It's hard to believe, but absentee voting is already open for our upcoming November 8th Midterm Election. I've collected a bunch of links in this blog to help you learn a bit more about the candidate and issues on your Midterm Ballot - and be ready to VOTE. 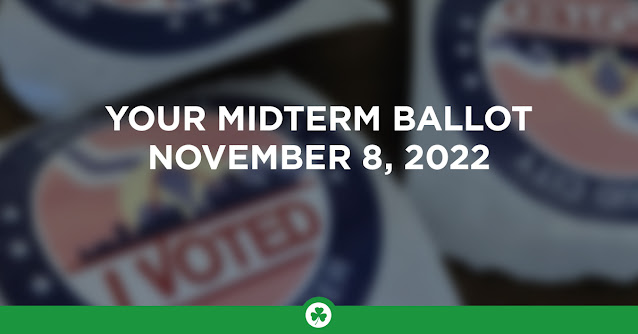 First, some KEY DATES for the Nov Election:

Next, let's take a look at what's on your BALLOT
Click on the green link above to see a PDF of the ballot
Candidates

Currently held by retiring Senator Roy Blunt (R) - who's held this seat since 2011.
ERIC SCHMITT  (REP) currently Schmitt is serving as the MO Attorney General, endorsed by Blunt. Schmitt made headlines for suing six local schools over masking requirements and has also sued the city of St. Louis over using funds for logistical abortion access.
TRUDY BUSCH VALENTINE (DEM) has the endorsement of Missouri AFL-CIO, Missouri Nurses Association, and Human Rights Campaign as well as the St. Louis Democratic Central Committee
JONATHAN DINE  (LIB) Dine also ran an unsuccessful bid for this seat in 2012
PAUL VENABLE (CON) Follow the link for more about his personal views

Bush is currently serving her first term after first being elected in 2020 replacing former Rep. Lacy Clay
ANDREW JONES (REP) Jones ran an unsuccessful bid for STL City Mayor in 2017
CORI BUSH (DEM) Bush is popular in the district winning the Dem Primary with 69.5% of the vote
GEORGE A. ZSIDISIN (LIB) “Supply chain is the solution” is his campaign theme

After redistricting, some of us who were previously in HD 83 with Jo Doll are now in HD 82.
ROBERT J. CRUMP (REP) Has unsuccessfully challenged Baringer in the past two elections for this seat
DONNA M.C. BARINGER  (DEM) Serving as Rep since 2017 and former Ward 16 Alderwoman

Not sure which House District you're in after redistricting? Check the map

General Election President of the Board of Aldermen

MEGAN ELLYIA GREEN - Green won the Primary on 9/13/22 with 53.72% of the vote citywide
JACK COATAR -In his first citywide race had a strong showing winning in the new 4th Ward and being the favorite in all three precincts in Lindenwood Park, Clayton-Tamm, and it was 50/50 in Clifton Heights.

It's important to remember, however, this was a super low-turnout election at just over 6% citywide, so November will likely look very different. And whoever wins will only fulfill the end of Lewis Reed's term, so this seat will be on your ballot again in Spring 2023. See full precinct-level results here.

ROBERT VROMAN (REP) Is currently serving as Vice-Chair for the GOP Central Committee and Ward 22 Committeeman, he previously ran unsuccessfully for City Treasurer in 2020 against Tishaura Jones.
GREGORY F.X. DALY (DEM) Daly has been serving as Collector of Revenue since 2007. His office has worked hard to modernize many of the cumbersome city payment procedures.

MICHAEL HEBRON (REP) Is servicing as Committeeman for Ward 6 GOP Central Committee and ran unsuccessfully against Steve Roberts for State Senate District 5 in 2020.
MAVIS [TESSA] THOMPSON (DEM) Thompson has served as License Collector since first being appointed by Gov. Jay Nixon in 2013.

TIMOTHY GARTIN (REP) Is currently serving as Ward 20 GOP Committeeman
MICHAEL BUTLER (DEM) Butler has served as Recorder of Deeds since 2018 and current Chairman at The Missouri Democratic Party
JEROME H. BAUER (GRN) Bauer has been a Green party candidate for many races previously including Governor, President of BoA, and US Senate.

My recommendation is to vote for all of the Democratic candidates – but please note, I have not made an endorsement in the President of the BoA race.

You can vote Yes/No to retain each. The best place to research judges is YourMissouriJudges.org - hosted by the Missouri Bar Association, this site has evaluations from attorneys who work with these judges. Click on "judges" and then you can search "Reviews by Circuit". I also find that a quick google search might bring up any high-profile cases the judge may have presided over.

Read Missouri Ballot Proposals in Plain English from Elad Gross, civil rights and government transparency attorney and host of the Eladpod.
You'll be able to vote YES or NO on the following issues - listed below is the language you'll see on your ballot plus the "fair ballot language" from the SOS site. You can click on the green title to link out to full ballot language.
Constitutional Amendment 1

A "no" vote will not amend the Missouri Constitution and limit the treasurer to investing state funds only in those investment options currently approved by the Constitution.

I'm aligned with The Missouri State Democratic Party on their "NO" recommendation on Amd. 1

Do you want to amend the Missouri Constitution to: *remove state prohibitions on purchasing, possessing, consuming, using, delivering, manufacturing, and selling marijuana for personal use for adults over the age of twenty-one; *require a registration card for personal cultivation with prescribed limits; *allow persons with certain marijuana-related non-violent offenses to petition for release from incarceration or parole and probation and have records expunged; *establish a lottery selection process to award licenses and certificates; *issue equally distributed licenses to each congressional district; and *impose a six percent tax on the retail price of marijuana to benefit various programs? State governmental entities estimate initial costs of $3.1 million, initial revenues of at least $7.9 million, annual costs of $5.5 million, and annual revenues of at least $40.8 million. Local governments are estimated to have annual costs of at least $35,000 and annual revenues of at least $13.8 million.

A “yes” vote will amend the Missouri Constitution to remove state prohibitions on the purchase, possession, consumption, use, delivery, manufacture, and sale of marijuana for personal use for adults over the age of twenty-one.

The amendment would also allow individuals with certain marijuana-related offenses to petition for release from prison or parole and probation and have their records expunged; along with imposing a six percent tax on the retail price of recreational marijuana.

A “no” vote will not amend the Missouri Constitution and the sale and use of marijuana for recreational purposes will remain prohibited under current law. Medical marijuana would remain unchanged.

If passed, this measure will impose a 6 percent tax on the retail price of recreational marijuana.
Yes on 3 has been endorsed by Missouri AFL-CIO, St. Louis County and City NAACP, Missouri NORML, Empower Missouri, ACLU of Missouri, and the Missouri Association of Criminal Defense Lawyers. My recommendation is "YES" on Amd. 3
Read a comprehensive guide on all the details here.

Shall the Missouri Constitution be amended to authorize laws, passed before December 31, 2026, that increase minimum funding for a police force established by a state board of police commissioners to ensure such police force has additional resources to serve its communities? State and local governmental entities estimate no additional costs or savings related to this proposal.

A “no” vote will not amend the Missouri Constitution regarding the funding for a police force established by the state board of police commissioners.

I'm aligned with The Missouri State Democratic Party on their "NO" recommendation on Amd. 4

A “yes” vote will amend the Missouri Constitution to create the Missouri Department of the National Guard as a new state agency, headed by an adjutant general appointed by and serving at the pleasure of the governor by and with the advice and consent of the Senate.

A “no” vote will not amend the Missouri Constitution regarding the National Guard.

I'm aligned with The Missouri State Democratic Party on their "NO" recommendation on Amd. 5

Shall there be a convention to revise and amend the Constitution?

A “yes” vote will require the governor to call an election of delegates to serve at a convention for the purpose of revising or amending the Missouri Constitution. Any revisions or amendments will then be put to a vote of the people for their consideration.

A “no” vote will mean no constitutional convention will be held.

More from St Louis Public Radio on this issue.

I'm aligned with The Missouri State Democratic Party on their "NO" recommendation on this Constitutional Convention Question.

SLPS Board of Education (vote for two)

DR. J. L. QUINONES - Longtime educational advocate, Quinones ran previously for school board in 2021
EMILY HUBBARD - Endorsed by NPE Action and Local 420, AFL-CIO unions
DONNA R. JONES - Jones was first elected in 2006 and is currently Board Secretary, also endorsed by AFT & AFL-CIO unions
WILLIAM [BILL] MONROE - Monroe previously served on the board prior to 2017
DAVID L. JACKSON, JR. - Jackson has previously served on the board prior to 2015

Here's an article from The Post-Dispatch in 2017 about the past state of the board.

Local teacher's union AFT 420 as well as AFL-CIO, the STL Labor Council, and, Solidarity with SLPS have endorsed both Jones and Hubbard. Personally, I will follow their endorsements.

So yes, this is a looooong ballot. Be ready to vote, make your plan and if you can, take advantage of that no-excuse absentee voting starting two weeks before Election day! Happy Voting!