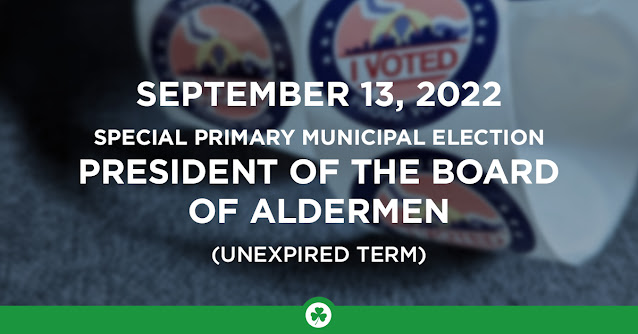 Regular polling locations won't be open for this election. You will need to choose one of 15 Special Voting Centers across the city to cast your ballot or you can vote absentee in person with no excuse needed between now and the election.  See the full list of polling locations.

It's a busy election year in St. Louis city. Here's a bit more about the upcoming Special Primary Municipal Election for the vacancy of President of the Board of Aldermen (BoA).

This President of the BoA is the only thing on your ballot.

After the resignation of Lewis Reed, we have a vacancy to fulfill the remainder (unexpired) term of the President of the BoA which expires in the Spring of 2023.*

The Special Primary Municipal Election will be held on Tuesday, September 13, 2022. This will be a primary under the new Approval Voting System  (Prop D) --  a non-partisan primary where the top two candidates will move on to the General election.

After the disqualification of Mark Kummer, there are only two candidates in this race. Meaning, that both MEGAN ELLYIA GREEN, and JACK COATAR will move on to the General Municipal Election on November 8, 2022.

The Post Dispatch has a nice overview of the Election here "There’s an election in St. Louis this week. Will it matter?"

Megan Green ran unsuccessfully for President of the BoA in 2019. She finished a close third place to both Lewis Reed and former senator, Jamilla Nasheed in March 2019. Green has served as Alderperson of the 15th ward (Tower Grove South) since 2014, easily winning her re-election in 2021 with 67.3% of the vote. She also ran for MO Senate District 5, losing by only about 1,000 votes in the August 2020 Primary to Steve Roberts. Green has also earned the endorsement of Mayor Jones and Congresswoman Cori Bush.

You can learn more about Megan Green on her website here.

Jack (John) Coatar has served as the Alderperson for Ward 7 (Soulard/Downtown) since 2015. He narrowly held off a challenge from Shedrick Kelley in April 2021 retaining his seat by only 122 votes. This will be the first city-wide office Coatar is seeking. He also sued to challenge the residency requirements of challenger Mark Kummer, ultimately getting him disqualified from this race. Coatar has the endorsement of former Mayors Slay and Krewson.

You can learn more about Jack Coatar on his website here.

See how both of these candidates have voted on key issues in the city by looking at the BoA Board Bill Votes on the city website. You can also learn more about any of the Alder's sponsored bills or committee assignments on this site.

This will also be the first election since the passage of HB 1878 -- there's a ton of stuff packed into this bill (more on that later) but for now, be ready to meet new photo ID requirements and in a bit of good news: utilize two weeks of early in-person absentee voting. This new law goes into effect on August 28, 2022 - so it will be in place during this Special Election.

Here's some highlights of the new law from our friends at STLPR: 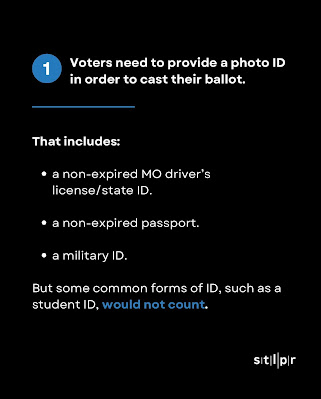 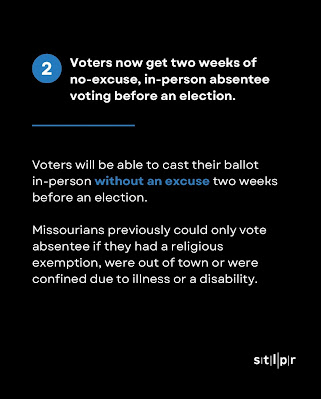 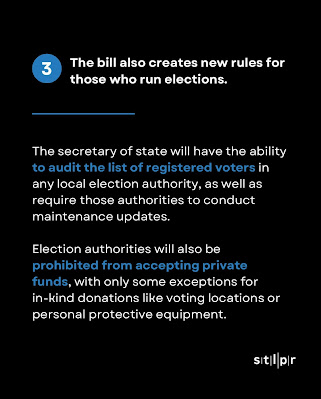 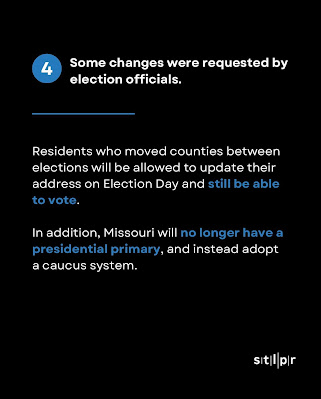 Under the law, acceptable photo identification includes a non-expired Missouri driver’s license or state ID. Other approved forms of ID would include non-expired passports and photo military IDs, as well as other documents.

Scheduling a special election for this President of the BoA hasn't been without criticism  -- I agree with the statement made a while back by former Mayoral candidate and current Ward 20 Alderwoman Cara Spencer about it. Hopefully, this can all be avoided the next time around.

Posted by Carolyn McMahon, 24W Committeewoman at 3:12 PM No comments: