We've got more elections this year, Saint Louis City. The next one is a Primary Election to be held on Tuesday, August 2, 2022. **Please check your polling location as the new ward/precinct maps are in effect and your polling place may have changed.** 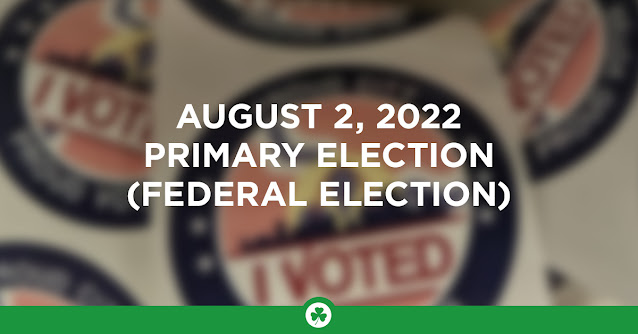 On election day, you will be asked which one of six ballot styles you want – Republican, Democrat, Constitution, Libertarian, Green Party, or Non-Partisan (only the issues). In this blog, we'll only be looking at the Democratic candidates with links out to their campaign websites.

I have endorsed Rep. Cori Bush in this race.

Karla May - unopposed in Primary

Collector of Revenue, License Collector, and Recorder of Deeds all unopposed in the Primary

Prop F - vote "YES" to support changing the city charter to increase the maximum fine for violations of city ordinances regarding protection of environmental conditions from $500 to $1,000.

Both these ballot issues have also been endorsed by the ward organization and the St. Louis City Democratic Central Committee.

Polls will be open from 6am to 7pm on Tuesday, August 2nd. Make a plan to vote now! Remember to check your polling location as it may have changed. New voter ID laws do not take effect till after this election. More on that to come...