There are only two things on your April 5th ballot - Prop R, which is a city charter amendment, and a Bond Election. Both are Yes/No votes. 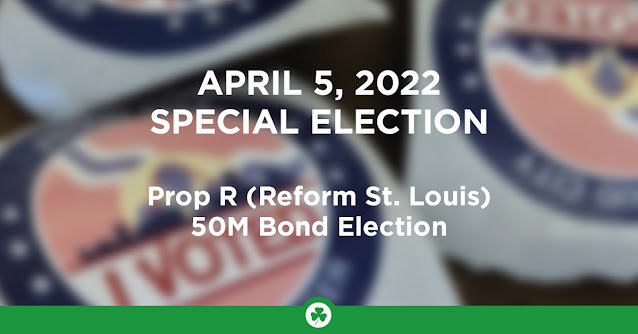 Prop R is an initiative petition campaign Reform Saint Louis from Show Me Integrity. This is the same group that back in 2020 worked to back Prop D (Approval Voting in St Louis City Primary Elections). Be sure to read the Full language here or it will also be posted at your polling location. One important note, the third bullet speaking to ward boundary maps would NOT apply to our current redistricting/ward reduction boundary maps. Should this initiative pass, it would apply after our next Census.

Shall Article IV of the City of St. Louis Charter be amended to:

* Prohibit Aldermen from taking actions on matters pending before the Board of Aldermen where they have a personal or financial conflict of interest;

* Require that Aldermen's financial disclosure statements be open to the public;

* Have ward boundary maps drawn by an independent citizens commission after each decennial census; and

* Prohibit the Board of Aldermen from changing voter-enacted voting methods for municipal offices without first submitting such changes to the voters?

Read more about the Capital Improvement Bond from The St. Louis Post-Dispatch

"The measure would not trigger a property tax increase and the bonds could be financed using the city’s current tax rate, officials said.

A summary attached to the bill says the city’s backlog of unmet infrastructure needs greatly exceed the amount of federal money expected by the city in the near future."
"Among supporters is Comptroller Darlene Green. “The reality is the city has many, many needs and while it’s wonderful we have so much money coming from federal grants, we also have the ability within the city’s current tax rate to issue bonds without raising taxes,” said Tyson Pruitt, a spokesman for Green."
(St Louis Post Dispatch)

Shall the following be adopted:

Proposition to issue bonds of The City of St. Louis, Missouri in an amount not to exceed Fifty Million Dollars ($50,000,000) for all or a portion of the following purposes:

(5) providing local matching share funds, where applicable and necessary, to utilize federal funds in furtherance of any of the cited projects herein;

(6) replacing, improving, renovating and maintaining buildings, bridges, and equipment of the City of St. Louis, such as neighborhood recreation centers and firehouses; and

(7) paying for expenses associated with the issuance of such bonds. If this proposition is approved, the property tax levy is estimated to remain unchanged.

Polls are open 6am to 7pm on Tuesday, April 5, 2022. Ward & Precinct numbers are the same as our previous election. The new redistricted maps are not in place for this election. Check your polling location here.

The 24th Ward Democrats, by a vote of their paid membership, have endorsed a YES vote on both of these issues. The St. Louis City Democratic Central Committee has endorsed NO on R, and YES on Prop 1. Personally, as your Committeewoman, I will be voting as the StLDCC has endorsed.