Our Next STL City Mayor 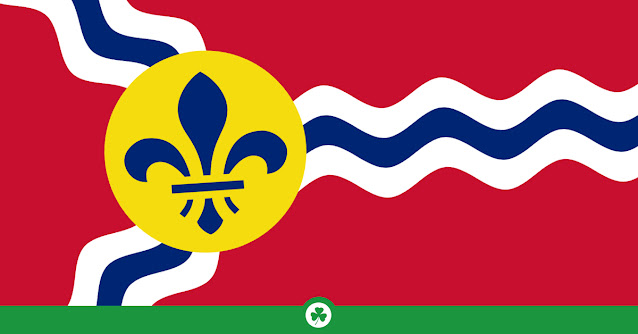 The field is set, we have four candidates for Saint Louis Mayor in the March 2, 2021, Non-partisan Municipal Primary Election. With the passage of Prop D in November, we now have Approval Voting for the offices of Mayor, Comptroller, President of the Board of Aldermen, and Aldermen.
For those of us in the 24th Ward, we don't have an Aldermanic race this year, so you'll only have Mayor and Comptroller on your ballot, both qualify for Approval Voting, but since our current Comptroller Green is running unopposed, it doesn't change anything in that race.
With Approval Voting, you can choose one or more candidates that you like in this Primary. The top two vote earners will go on to the General Election (April 6, 2021) and you can select your one favorite there.

So, let's meet the Mayoral Candidates:

LEWIS REED
Reed is currently serving as President of the Board of Aldermen. Running unsuccessfully for Mayor in 2017 Reed received 18.3% of the vote to Lyda Krewson's 32.04% citywide in the Democratic Primary (which had 7 Democrat candidates). In July 2020, Reed introduced BB71 which had language closely mirroring the Rex Sinquefield-funded ballot initiative that had been rushed through the board in an effort to Privatize Lambert Airport. Additionally, Reed is responsible for bringing Nextdoor website/app to Saint Louis.
"For Lewis Reed, Mayor’s Job Would Allow ‘Implementation’ Of Priorities At Long Last" listen to Lewis' interview on St. Louis Public Radio, here.
CARA SPENCER
First elected in 2015 after unseating a 20-year Alder in the 20th Ward and then winning reelection in 2019 with 70% of the vote. She's been a vocal anti-privatization advocate at the BoA even in the face of intimidation by one of the consultants tied to the effort who threatened to recall her. Spencer has taken on politically connected slumlords and interests in the city and proven herself as a fighter for her community. Spencer's campaign is a grassroots effort fueled by volunteers reflecting her commitment to people over politics.
"As Mayor, Cara Spencer Would Use ‘Focused Deterrence’ To Fight Crime" listen to Cara's interview on St. Louis Public Radio, here.
TISHAURA O. JONES
Tishaura O. Jones is currently serving as Treasurer for the City of Saint Louis. One day after being re-elected, she announced her candidacy for Mayor. Jones is known for establishing the Office of Financial Empowerment (OFE) during her tenure as City Treasurer. Which among other things, funds a College Kids Program helping St. Louis students save for their college tuition. Criticism of this effort is largely due to compartmentalizing parking revenue funds from the general funds of the city. Advocates for Jones support her use of funds for programs of the OFE, sighting the benefits to city residents, especially youth who otherwise might not be able to fund a college education.
"As Mayor, Tishaura Jones Would ‘Reenvision’ Public Safety — And Maybe Cut Police Overtime" listen to Tishaura's interview on St. Louis Public Radio, here.
As you may know, reproductive rights are a passion of mine, so I was thrilled to see both Cara Spencer and Tishaura Jones have been endorsed by the political arm of Planned Parenthood and Naral Pro-Choice Missouri has given Jones an endorsement and Spencer the Friends of Reproductive Freedom designation.
ANDREW JONES
Andrew Jones (R) ran for Mayor in 2017 losing to Lyda Krewson by 17.30% to 67.53%. During that race, Jones remarked that "he’s got Democratic apathy on his side"  Candidates won't have their political affiliation listed this time, but Andrew Jones is the only Republican you'll see on your Primary Ballot for Mayor.
"As Mayor, Andrew Jones Would Have The Police Department’s Back" hear Andrew's interview on St. Louis Public Radio, here.
Personally, I'll be supporting both Cara Spencer and Tishaura Jones in our upcoming Primary.

Alderwoman Dr. Megan Green wrote a great rationale on this and both these candidates also have the Endorsement of our Alderman, Bret Narayan.

In 2017, we had seven Democratic candidates in the Primary.

Tishaura Jones received the second-highest numbers in the ward with 557 votes and Lewis Reed was 4th with 220 votes, but the clear winner was Lyda Krewson with 960 votes. 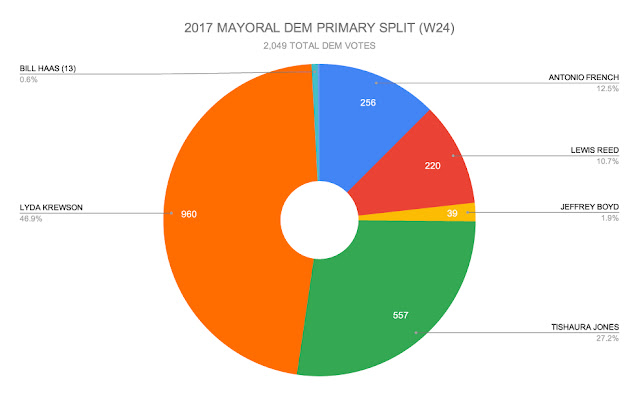 You really should VOTE in Municipal Elections.

Did you know that the Mayor and the Comptroller (along with the President of the Board of Aldermen) make up the Board of Estimate and Apportionment (E&A) controlling the city operating budget? Who we elect into these seats directly affects your life as a city resident.
Turnout is historically pretty low in the Municipal Elections. The 24th Ward averaged 28.17% in the 2017 March Municipal Primary and a slightly better 37.01% in the April General (the last Mayoral Election).  I know we can beat these turnout numbers in 2021, so...

Make your plan to vote today.

Absentee request forms (to have a ballot sent to you) are available NOW for the March 2 Primary and April 6th General Elections. In-person absentee voting will open on 1/20/21 at the Election Board at 300 N. Tucker and additionally in satellite locations two weeks prior to the Election. 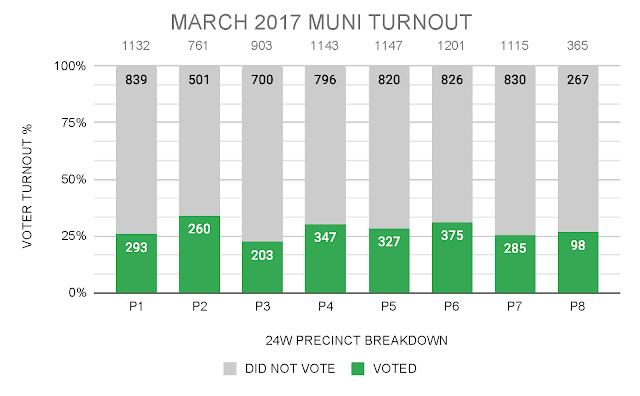 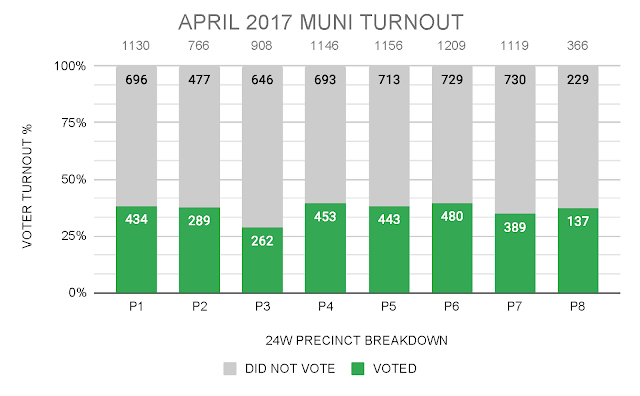