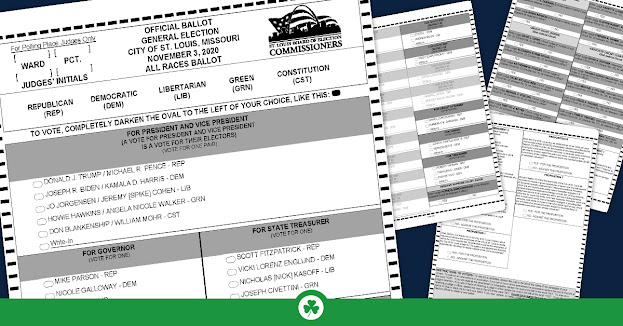 As we're all looking ahead to the General Election on November 3, 2020 – it's important to remember that this isn't just a Presidental Election, you've got statewide Missouri offices, State Reps/Senate, City of Saint Louis offices, Judges, and Issues to learn about. This blog is an overview of what's on your ballot, and where you can learn more.

Bookmark the Missouri ACLU Election Hub as a great resource for ballot information, finding a notary, voter information/registration, and keeping up with everything you need ahead of Election Day.
View plain language descriptions on Vote411.org from the non-partisan League of Women Voters about what's on your ballot. The issue summaries below are pulled from their site.
LWV/STL Post Dispatch Voter Guide
Collective Endorsements - Organization for Black Struggle (OBS)
View from the BoA: Here is the voting guide published by Ald. Meghan Green and one from Ald. Annie Rice
See the Full Endorsements from the 24th Ward Democrats

Much information is available about our current inhabitants of the white house in Donald J. Trump/Mike Pence (R) and the Democratic ticket of Joseph Biden/Kamala Harris (D).

Governor Mike Parson (R) took office on June 1, 2018, following the resignation of Eric Greitens. He's been widely criticized for his lack of statewide leadership during the COVID-19 pandemic. Nicole Galloway (D) is our current MO State Auditor and the only statewide elected Democrat. Galloway has the Endorsement of Emily's List, a National Organization supporting diverse Pro-Choice Democratic candidates. Galloway has been a champion of transparency which is demonstrated in the audit reporting found on the Auditor's website.

The Secretary of State is responsible for: Drafting Fair Ballot Language, Administering Elections, Educating Voters. This makes the SOS one of the most important elected officials in the state. Current SoS Jay Ashcroft (R) has demonstrated that he's not interested in making it easier for Missourians to vote with our confusing voting laws and deceptive ballot language for Amd. 3 that ended up in the courts to get fair language presented to voters. In contrast, Yinka Faleti (D) is a champion for voter's rights. He's also a West Point graduate, and a U.S. Army Veteran. Yinka is running to increase opportunities to vote, reduce barriers to voter participation, and protect and honor our ballot initiative process.

Current MO State Treasurer Scott Fitzpatrick (R) has served since 2019 when he was appointed by Parson after Eric Schmitt was appointed to Attorney General creating a vacancy in the Office of State Treasurer. Vicki Englund (D) is a former State Representative with a platform of Experienced Leadership, Economic Recovery Plan, and Dedication to Inclusion. Englund has been posting an idea a day leading up to the election about how to improve Missouri's economy. She is also endorsed by Emily's List.

Eric Schmitt (R) was appointed by Parson in 2019 to the office of Attorney General after the incumbent, Josh Hawley was elected to the United States Senate. Previously he served as State Treasurer and State Senator. On the Democratic side, Rich Finneran (D) is a former federal prosecutor and Assistant U.S. Attorney. During his time as a federal prosecutor, Rich handled two of the largest financial fraud cases ever prosecuted by the U.S. Attorney’s Office.

Congressional District 1 (which encompasses all of Saint Louis city, and parts of STL County) has been represented by Lacy Clay (D) since 2001. Clay lost to Primary Challenger Cori Bush (D) in August 2020 with a platform that puts regular, everyday people first, with solutions that are long overdue. Bush will face Anthony Rogers (R) and Alex Furman (Lib) in November. Rogers has endorsements of Roger Stone and Tiger King star Joshua Dial and Furman is Vice President of STL Proud Boy chapter and served time with drug-related charges.

Jo Doll (D) won the Democratic Primary in August to replace term-limited Gina Mitten. With a strong platform focusing on healthcare and family, Doll is the presumptive Rep but will face Andrew Bolin (Lib) on November's ballot before it's official.

Incumbent and primary winner Kimberly M. Gardner (D) is challenged by Daniel Zdrodowski (R). Zdrodowski is critical of Gardner's work, but Gardner easily won the primary with 60.7% of the vote.

Incumbent and primary winner Tishaura O. Jones (D) is challenged by Robert Vroman (R). Vroman describes himself as "pro-business, pro-choice, pro-gun, pro-immigrant, anti-prohibition, anti-war" in contrast, Jones is working to improve the overall financial health of city residents by opening the Office of Financial Empowerment, offering free financial literacy classes and counseling, and the College Kids Savings Program.
For candidates, I will be voting the straight D ticket on these races.

Researching judges is always something that I get a lot of questions about. The best resource we have to see how the MO Bar Review Committee rates our judges at YourMissouriJudges.org
LWV will host a Meet the Judges webinar on 9/28.
Thread by Rebecca Rivas (Reporter for @MO_Independent) on 22nd Circuit Judges.

(Full Text)
"Do you want to amend the Missouri Constitution to extend the two term restriction that currently applies to the Governor and Treasurer to the Lt. Governor, Secretary of State, Auditor and the Attorney General?"

State and local governmental entities estimate no costs or savings from this proposal.
Summary: If passed, Amendment 1 would limit the lieutenant governor, secretary of state, state auditor and attorney general to two terms. The state constitution now limits only the governor and treasurer to two terms. Supporters say term limits will keep elected officials from becoming career politicians. Opponents contend that those positions should be limited by voters, not the constitution.
24WPD have endorsed Yes on 1.

(Full Text)
Known as "Dirty Missouri" This effort by those in Jeff City would overturn the Clean Missouri Amendment voters passed by 62% in 2018. So, if you voted yes on Clean MO, vote NO on 3.
"Shall the Missouri Constitution be amended to:
• Ban gifts from paid lobbyists to legislators and their employees;
• Reduce legislative campaign contribution limits;
• Change the redistricting process voters approved in 2018 by: (i) transferring responsibility for drawing state legislative districts from the Nonpartisan State Demographer to Governor-appointed bipartisan commissions; (ii) modifying and reordering the redistricting criteria.

A “yes” vote overturns the will of 62% of MO voters who passed Clean MO in 2018
A “no” vote upholds what voters passed in 2018 with Clean MO
Summary: This proposal asks voters to reverse key parts of a "Clean Missouri'' redistricting overhaul they approved in 2018. The ballot language was disputed and had to be finalized by a Missouri Western District Court of Appeals ruling.

If passed, Amendment 3 would eliminate the nonpartisan state demographer used for redistricting approved in 2018. It would return to the use of bipartisan commissions in the state house and state senate appointed by the governor. It would not use the total population count to determine districts, but only count eligible voters. It would also change the limit of lobbyists' gifts from $5 to $0 and lower the campaign contribution limit for state senate campaigns from $2,500 to $2,400.

Supporters say that voters need to be given another chance to consider the issue of redistricting. They also say that bipartisan commissions would less likely be corrupted, reflect the views of different communities and protect minorities.

Opponents say that Amendment 3 is the legislators' gerrymandering amendment, and that it would reverse the 2018 voters' decision, thus threatening democracy. Missouri would be the only state in the country to discount 1.5 million children, immigrants, international students and incarcerated citizens. Communities of color would be significantly underrepresented.
I urge you to vote NO on 3. 24WPD have also endorsed No on 3.
More about statewide Amendments 1 & 3

Proposed by Initiative Petition and supported by STL Approves, this would change how local STL elections are run taking effect ahead of our Municipal Elections in March 2021.

"Shall the City of St. Louis adopt an ordinance to:
* establish an open, non-partisan system for elections to the offices of Mayor, Comptroller, President of the Board of Aldermen, and Alderman
* enable voters to choose all the candidates they wish in the open, non-partisan primary
* allow the top two candidates to then compete in a runoff general election?"

Summary: This proposition was placed on the ballot through an initiative petition drive. If passed, it would remove party affiliations from the primary ballot for candidates for mayor, comptroller, aldermanic president and alderman, and make the general election a runoff between the top two vote-getting candidates for each post. In the primary, voters could vote for any or all candidates they approve and then would vote for one in the general election. The change would go into effect for the 2021 elections. Supporters complain that some city officials have been elected with less than 40% of the primary vote under the current system. They add that under the proposition, some officeholders would be elected with broader citywide support. They also point out that nonpartisan city elections are held in all other Missouri municipalities and 80% of municipalities nationwide. Opponents say political parties would be hurt and lose their candidates' party identity and that the ward committee system would be weakened. They also say residents would be confused by the proposed change.
Both 24WPD and both committeepersons in the 24th endorse Yes on D.

"Yes" vote would allow city employees to live outside city boundaries
"No" vote would keep the current requirement in place for city residency.

An important note about this Proposition, this DOES NOT include employees of SLMPD as that requirement has already been lifted by the MO Legislature and was signed into law 9/21/20.
Summary: The measure, a proposed amendment to the city charter, would extend repeal of the city residency requirement to all city civil service employees. A state law passed in September already has removed the requirement for employees of the police and fire departments and other first responders hired before September 2023. Supporters of repeal say it could help the city attract more people to fill hundreds of vacancies in city government. Opponents say the residency requirement makes it more likely that city employees will know the areas they serve. Opponents also argue that the city personnel department should do a better job recruiting city residents for available jobs.

Prop R is similar to a scenario that recently hit a roadblock in the County.
Summary: City officials want to increase the tax rate for the community children's services fund from 19 cents per $100 dollars assessed valuation to 25 cents, the maximum allowed by state law. The Children's Services fund is administered by the city mental health board. If passed, the owner of a $150,000 home would pay about $17 more a year, and about $2.3 million would be raised annually. The additional funds would be targeted for early childhood services for children under age 5 in the city's most vulnerable neighborhoods.

Supporters say early childhood education is a key to success in school. The current 225 licensed early childhood centers serve about 10,000 children, but many more need these services. Parents of these children would be able to work and pursue educational opportunities to improve their families' lives.

24WPD are No on R.
OBS, Teacher's Union, and STL School Board have all OPPOSED this measure.

"Yes" vote would impose tax on Telecomm Providers
"No" vote would not
Summary: Officials want to replace the city's $2.20 per linear feet right-of-way fee that network providers pay before giving service, with a gross receipt tax of 7.5 percent. If passed, customers will pay the same tax as they do for telephone service. The right-of-way fee is currently rolled into internet charges. Some parts of the city, particularly north of Delmar, are getting poor service, supporters say. They add if the right-of-way fee is eliminated, providers will have a strong incentive to move into new neighborhoods, competitors will enter the market and all parts of the city will get better service. Providers will not have to pay high fees up front. They can collect the tax after gaining customers.
24WPD has endorsed Yes on T.
Make your VOTING PLAN now, and make sure your voice is heard on 11/3/20! Please check back to this blog as it will be updated as new sources/information becomes available.