Be a Poll Worker

As many of you know, I've been working as an Election Judge for the past handful of Elections. And this year, it's especially important to recruit new Poll Workers because many of those to consistently do this work unavailable due to the COVID-19 Pandemic.
Signing up to be a Poll Worker is an important way you can ensure we don't have polling locations close. Staffing Poll Workers is key to keeping all of our city polling locations open, making it as accessible as possible for voters to cast their votes.
We can't have a successful Election Day without some of us stepping up to do the work on November 3rd. 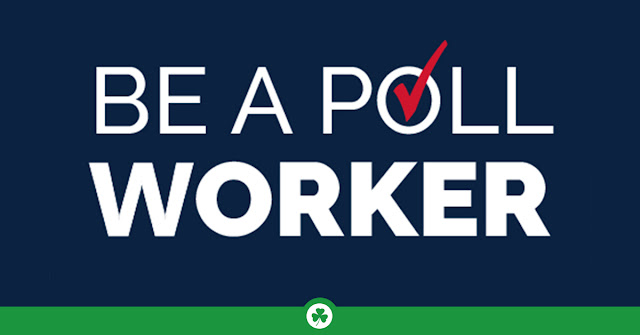 There are a couple different jobs you could have on Election Day:

Check-in and assist voters on Election Day, these are partisan roles

In order to become an Election Judge in the City of St. Louis, residents must:
• Be a City of St. Louis resident
• Be 18 years of age or older and a registered voter
• Be able to read, write, and speak the English language
• Be available from 5:00 a.m. until the closing of the polls
• Attend a training session prior to the Election
• Pay per Election = $125 (includes mandatory training pay)
• Declare a Political party (Democrat, Republican or Independent)
Online Poll Worker Application for St. Louis City

Set up and maintain all the technical aspects of the polling place machines under the direction and rules specified by law, the BOE, and poll managers, this is a non-partisan role.
Requirements: (including those above except this is non-partisan)
• Must have basic computer comprehension and mechanical skills
• Non-Partisan Position Pay per Election $150 (includes 6-hour training class)
• Must have your own vehicle
• Able to lift 40 lbs
Technical Specialist Online Sign-up

• Students must be at least 15 years old and in tenth, eleventh, or twelfth grade at a St. Louis City High School
• Students who are 16, 17, or 18 years of age can earn community service hours for training service and working on Election Day(s) OR may be compensated monetarily for their services
• Students must serve as Student Poll Workers/Greeters with the permission of a parent or legal guardian
• Students must have a recommendation from their high school for participation in the program. [Principal or counselor preferred]
• Students will work in a non-partisan capacity
• Students hours on Election Day are 5:30 a.m. to 8:00 p.m. (Ask regarding partnering hours.)
Download High School Student Poll Worker Application
Mail your paper application to:
Attn: Summer Richardson
Assistant Deputy Republican Director
St. Louis City Board of Election Commissioners
300 N. Tucker
St. Louis, MO 63101

Democratic Poll Watchers are not employed by the Election Board but are credentialed and allowed to be in a polling location to watch the process. If you're interested in volunteering in the city of St. Louis as a Democratic Watcher/Challenger send Carolyn an email and her know you'd like to know more.

So, make this year the year YOU help make our elections run smoothly and witness Democracy in action by working as a Poll Worker. I won't lie to you, it's a long day... but it's also incredibly rewarding.
If you are employed by the Election Board, you can vote absentee in-person ahead of Election Day.
Learn more about how you can be involved in St. Louis City Board of Election Commissioners website. Or if you're outside the city, you can apply on your local election authority website or learn more on the Secretary of State website.
FYI: You may also See Poll Managers and Roving Deputies in the city. Poll Managers are long-time Election Judges who will oversee the operations at each polling location, they work in bi-partisan teams, meaning there will a Republican and Democrat Poll Manager at each polling location. Roving Deputies also work in bi-partisan teams but they rotate between polling locations within a ward of the city. Roving Deputies are escorted by an SLMPD officer, they are why you might see more police around your polling location than usual. Rovers are ultimately responsible for returning ballots back to the Board of Election downtown after polls close, so remember, while it's a long day for all Election Judges, it's the longest day for a Roving Deputy and Poll Managers. Bring them coffee.
Posted by Carolyn McMahon, 24W Committeewoman at 7:36 PM