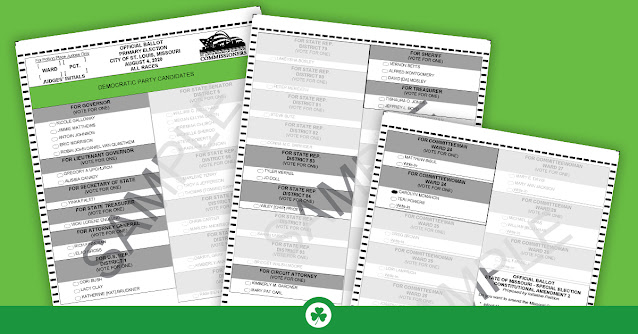 Now that you've confirmed your voter registration, and figured out your plan to vote (in-person, absentee or mail-in) it's time to look at what's on your ballot.

You can look at the August 4th full combined ballot for Saint Louis City to see all the candidates/issues. In this Primary Election, you can choose from one of six ballot options, Republican, Democrat, Libertarian, Green, Constitution, or Non-partisan (issues only, no candidate) ballot.
If you're looking at that combined city ballot (above) remember that on your ballot August 4th you'll:
1. Only see the ballot for the party you select
2. Only see the District and Ward races for where you live
Not sure which Congressional District, House District, or Ward you live in? You can look up your Representatives on the STL city website by checking the box "contacts and elected officials."
In this blog, I will focus on the Democratic ballot in my home ward, the 24th in St. Louis City.
The sample ballot shown below is abbreviated and has the races outside our ward screened-back. 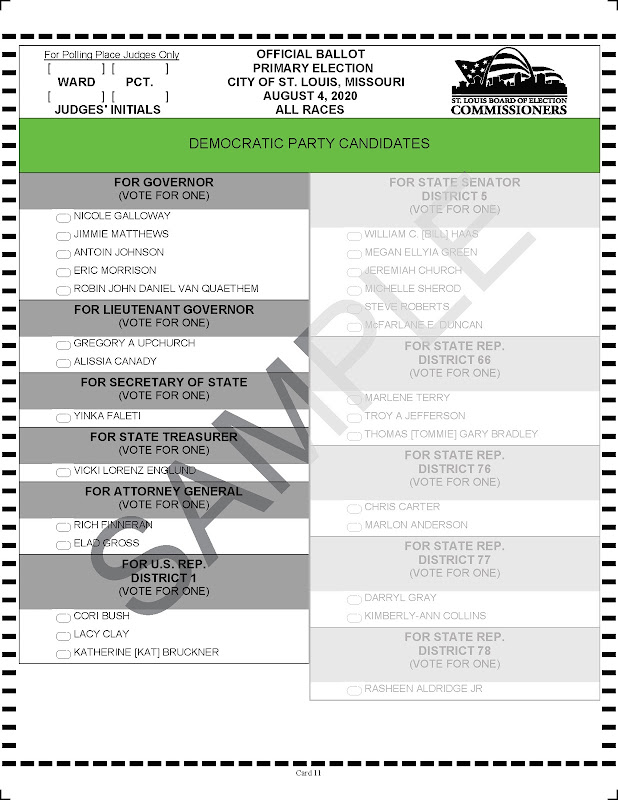 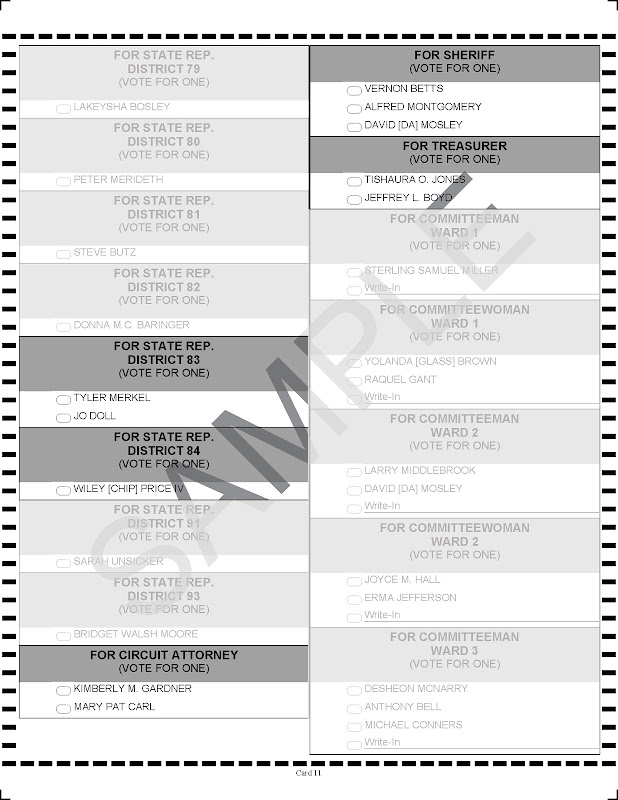 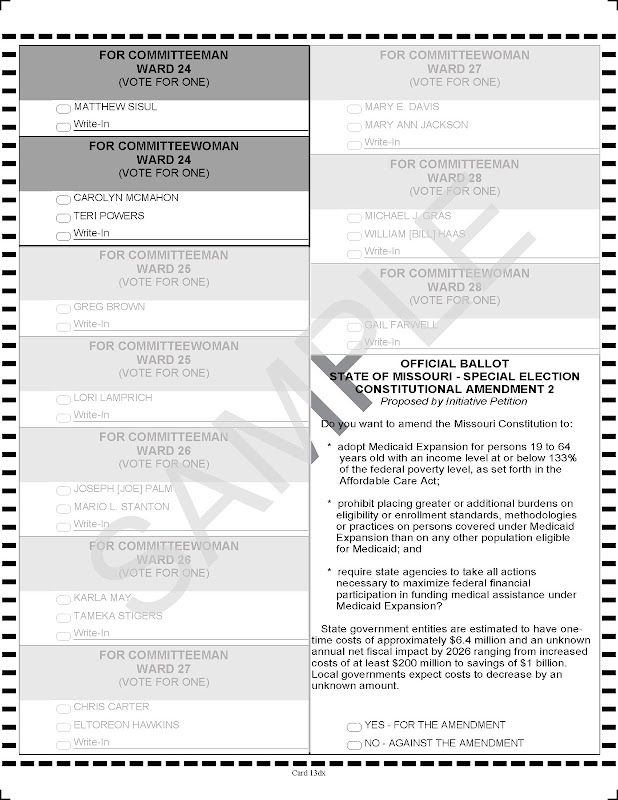 This Primary Election has many candidates from the big congressional races, to statewide Missouri races, and down to the hyper-local partisan Committeepersons races in your ward.

We'll look at your 24th Ward Democratic ballot the way it will appear for you on August 4th, 2020:

Nicole Galloway - CPA and our current Missouri State Auditor, Galloway is the presumptive Democratic nominee. Galloway is currently the only statewide elected Democrat. Nicole has received the endorsement of Emily's List. The 24th Ward Progressive Democrats endorsed her as well.

Eric Morrison - Running on "I Got Five on It" Platform: Education, Equity, Equality, Ethics, Environment

Alissia Canady  - Former KC District 5 City Council Member, ran an unsuccessful bid for KC Mayor in 2019. She has received the endorsement of Emily's List. The 24th Ward Progressive Democrats endorsed her as well.

They will go on to face our current LG is Mike Kehoe (R) or one of the several other Republican challengers should he lose his Primary.

Vicki Englund - Former State Rep. and Lindbergh School Board member, Englund is running unopposed in the primary and will face current Treasurer Scott Fitzpatrick (R) in November. She has received the endorsement of Emily's List. The 24th Ward Progressive Democrats endorsed her as well.

Elad Gross - Former Assistant Attorney General, you might have heard about his Fight Against Dark Money or the Eladpod where he interviews many other candidates and discusses current issues. The 24th Ward Progressive Democrats endorsed him.

Either Finneran or Gross will go on to challenge incumbent Eric Schmitt (R) who was appointed by Gov. Parson in November 2018 following Josh Hawley's election to the US Senate.

Cori Bush - Grassroots activist and nurse who challenged Clay in 2018 and was featured in the documentary "Knock Down the House" alongside AOC, Amy Vilela (NV), and Paula Jean Swearengin (WV). Endorsed by the 24th Ward Progressive Democrats.

Bush won the 24th Ward in 2018 with 63.15% of the vote to Clay's 30.10% and that was with two other challengers (DeMarco Davidson & Joshua Shipp) in the race. This rematch will be one watch. Winner of this primary will face one of two Republican candidates in November.
Missouri House District Reps

Tyler Merkle - Local Attorney who has the endorsement of many labor unions as well as city and county leadership including 24W Committeeman Matt Sisul and 24W Alderman, Bret Narayan. The 24th Ward Progressive Democrats endorsed him as well.

Jo Doll - Elected to the Webster Groves School Board (2017) and a Licensed Physical Therapist, her platform heavy on Healthcare, Education, and Gun Safety. Doll has the endorsement of Gina Mitten.

HD83 is currently represented by Gina Mitten, who is term-limited. Either Merkle or Doll will go on to face Andrew Bolin (Libertarian) in November.

Kimberly M. Gardner - Serving as the St. Louis Circuit Attorney since 2017, Gardner is the first African-American to head the CAO. Gardner has a long, public history with the SLMPD and filed a civil rights lawsuit against them in January 2020. She was also a key player in the Former Gov. Eric Greitens investigation. The 24th Ward Progressive Democrats have endorsed Gardner.
Mary Pat Carl - Also serving as 16th Ward Committeewoman, Carl is challenging incumbent Gardner. She has been a lead homicide attorney and a prosecutor for 15 years in the Saint Louis area.

This is one of the more spirited races in STL city, as you can tell by this recent interaction between the candidates on a video conference. Either Gardner or Carl will face Daniel Zdrodowski (R) in November.

Alfred Montgomery - Former Deputy Sheriff, Montgomery is looking to address some of the issues he says he's seen from within the department.  The 24th Ward Progressive Democrats have endorsed Montgomery.

David (Da) Mosley - Running on the platform: "Enough is Enough" and also running to be the 2nd Ward Committeeman against incumbent Larry Middlebrook.
The winner of the Democratic Primary will go on to face one of two Republican Sheriff candidates in November.
Treasurer
Tishaura O. Jones - Current STL City Treasurer and former Missouri House of Representatives Assistant Minority Floor Leader, Jones has launched the "Office of Financial Empowerment" (OFE) to help STL make better financial choices, and the College Kids Program to help public school students start educational savings accounts. Jones has been endorsed by the 24th Ward Progressive Democrats.

Jeffery L. Boyd - Current Alderman representing the 22nd Ward, Boyd is critical of Jones' OFE and has pledged to return the parking fund to the city administration should he be successful in his challenge.
Either Jones or Boyd will go on to face Robert Vroman (R) in November.

Ward-level Races
As elected representatives for the political party, this election that appears on the Primary ballot is THE election for committeepersons.
Committeeman Ward 24
Matt Sisul - Longtime President of the Ellendale Neighborhood Association, and our current Committeeman since he was appointed in October of 2019. Sisul is running unopposed in this race with the endorsement of the 24th Ward Progressive Democrats.
Committeewoman Ward 24
Carolyn McMahon - Author of this blog and Past-President of the 24th Ward Progressive Democrats, McMahon is running to improve communication and transparency between Central Committee and local Ward organizations with a pledge to help anyone who wants to be involved find a way to connect. Carolyn has the endorsement of current 24W Alderman, Bret Narayan, and the 24th Ward Progressive Democrats.
Teri Powers - Incumbent Committeewoman who was first appointed in 2010. Powers has a challenger for the first time this election after running unopposed in 2012 and 2016.

Issues
Medicaid Expansion Initiative -  Constitutional Amendment 2
A YES vote on Amendment 2 will expand Medicaid in Missouri and bring more than a billion federal tax dollars back to our state and provide healthcare to 200,000 Missourians. A yes vote on Amendment 2 will make Missouri the 38th state (including DC) to have expanded Medicaid. You can also learn more at Missouri Healthcare for All. The 24th Ward Progressive Democrats have endorsed this initiative.
If you still have questions about registering to vote or how to request a mail-in or absentee ballot, check out my other blogs on those topics!
Remember to get out there and VOTE on August 4th!