If there's one thing that living through a global pandemic will demonstrate, it's how much we as a community need our public spaces. Our parks are one of the most amazing things about living in Saint Louis, and right here in the 24th Ward, we have some hidden gems. 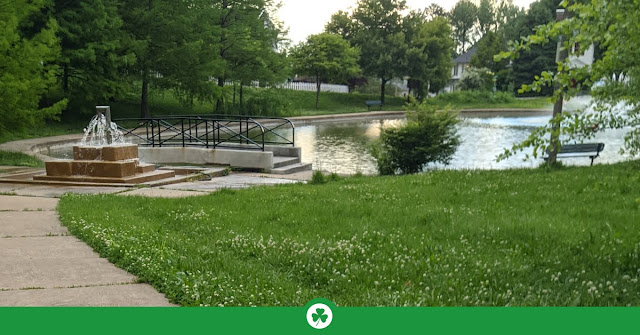 Clifton Park
Simpson Avenue loops around the "bowl" portion of the park that was originally developed as a private park for residents of Clifton Heights, the park was conveyed to Saint Louis city in 1912.  Ten years later, the city bought the adjoining property, enlarging the park to the 4.4 acres we know now.

Throughout the year you can find events sponsored by the Clifton Heights Neighborhood Association including the annual "Party in the Park" and Easter Egg Hunt. We enjoy the park with our dogs along the walking paths that cross through the park letting them say 'hi' to the many ducks that reside in the pond.

Franz Park
Bordered by Mitchell Avenue, Glades Avenue, Prather Avenue, and Kraft Street - Franz Park is also utilized by Wilkinson Early Childhood Center. Highlights of Franz Park include Tennis courts, softball fields, a soccer field, and exercise challenge course. The 4.67 acres became known as Franz Park after Sophia D. Franz gave her acres to the city for a park and playground in honor of her husband Ehrhardt D. Franz in 1915.

The shelter house and picnic tables are a great place to meet neighbors at a safe social distance, or in my case: Notary work.

Francis Slay Park
Located in the Ellendale neighborhood and bordered by McCausland Avenue, Arsenal Street, and Canterbury Avenue you'll find Slay Park. Known as Ellendale Park up until 2009, this park was named after former Democratic politician, restaurateur, and father of the former mayor Francis G. Slay. This 9-acre park was placed into ordinance in 1926 and features shared trails, a tennis court, soccer field, and baseball fields along with a shared trail and playground.
Turtle Park
While technically a part of Forest Park, Turtle Park is an icon of the Clayton/Tamm neighborhood. Located across from Pat Connolly Tavern at the intersection of Oakland and Tamm Avenues, Turtle Playground contains seven concrete turtles and one snake. The turtles were designed and sculpted by Bob Cassilly and the park opened in August 1996.

You can also see works by Cassilly at the St. Louis Galleria, St. Louis Zoo, and the Missouri Botanical Garden and in other cities across the country such as Dallas and NYC.

Forrest Park
One of the greatest benefits of living in the 24th Ward is our proximity to Forrest Park. Our Hi-Pointe, Franz Park, and Clayton/Tamm neighborhoods are all a short distance from the 1,370 acres and all the amazing culture of Forrest Park. Dedicated in 1874 to coincide with the centenary of the U.S. Declaration of Independence it was also the site of the 1904 World's Fair.

I could write a whole blog on the amazing features of Forrest Park, but my favorites aren't the sports courts, picnic areas, or playgrounds... you can find me in the Art Museum or on the trails.

Carolyn's campaign has started our community park clean-up events! We will visit these amazing parks leaving them a little cleaner than we found them. Follow us on Facebook or sign up to be on our email list to ensure you hear about these upcoming opportunities.

Posted by Carolyn McMahon, 24W Committeewoman at 8:00 AM